Head Coach: Rev. Todd "Coach B" Burden
Coach Todd Burden is the founder / director of InBounds Ministries and serves as a full-time missionary. InBounds was established over 20 yrs. ago utilizing athletics as a platform to share the good news of Jesus Christ as the Substitute that God sent into the game of life, and teaching the Bible as God’s Playbook.

As a coach he has been blessed to coach (for and against) numerous players that have gone on to the collegiate and professional levels; and was on the coaching staff of the 2005-2006 NACA Elite Division National Championship team. Since that time he has been afforded the opportunity to teach the game of basketball all over the world… and uses every one of those opportunities as an opportunity to share God’s truths!

As a minister Coach Burden has taught the Word of God as a school teacher, a youth pastor, a pastor, and as a missionary. He holds a Bachelor of Arts degree in Biblical Education and an Honorary Doctorate in Sacred Theology. He also has vast experience ministering through music. His missionary travels have taken him throughout the US, Europe, Central America, and the Caribbean.

With over 20 years of coaching / training coupled with over 30 years of ministry, Coach Burden has a lot of experience to draw from in teaching. One of his greatest strengths is taking those lessons and using them to make the truths of God’s Word come alive with clarity!

Please Pray About How You Could Help...  and pray for our 2022 Game Plan! WANT TO DROP A DIME: Click ASSIST 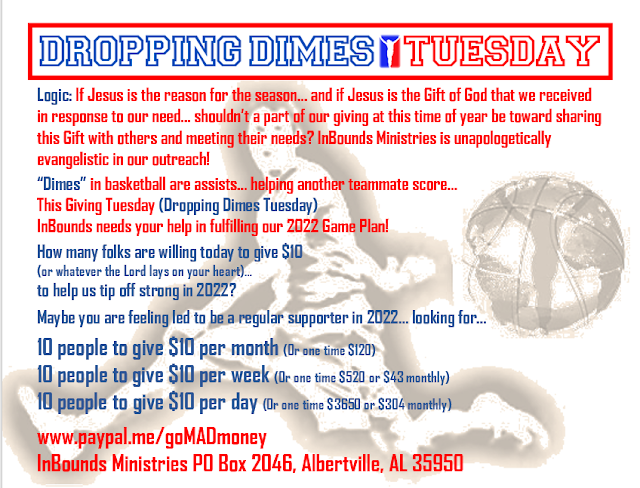